You are here: Home>Hospitals>Hill End>The History of Hill End Hospital

The History of Hill End Hospital 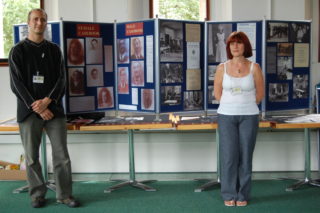 Gary Moyle and Paula Mumford with the exhibition on the history of Hill End. Trestle Theatre, 2009
HALS

There is not yet a full published history of Hill End Hospital. An unpublished history by Brian Anderson is held at Hertfordshire Archives and Local Studies (ref: Acc 3959). The following, by Gary Moyle, is taken from the introduction to the archive catalogue of the Hill End records.

Hill End Hospital, on the outskirts of St Albans, operated from 1899-1995, caring for people with mental health problems.

Before the late eighteenth century, there are only infrequent references to lunatics in the Quarter Sessions records, as they were often simply confined in Houses of Correction with rogues and vagabonds (Le Hardy, 1961, pp. 125-132). The involvement of the Quarter Sessions increased when, in 1774, they took over the licensing and oversight of private madhouses (14  Geo. III, c.49), for example that of Nathaniel Cotton at St Albans, where William Cowper was held from 1763-4. Fees were charged for these licences, which were renewed annually. In 1828, private asylums were further regulated and Commissioners appointed by the Secretary of State (9 Geo. IV, c. 41).

The 1853 Act (16 and 17 Vict. c. 97) gave local authorities wider powers for the provision of asylums. Under this Act, the Three Counties Asylum at Stotfold, Bedfordshire (near the Arlesey parish border) was established in 1860 for Hertfordshire, Bedfordshire and Huntingdonshire. This was later known as Fairfield Hospital. By 1876, it held 1000 inmates so enlargement was being considered, but the decision was made to build a new asylum for Hertfordshire patients only (documents: QS Misc. B12, B14, B16, B20, B23-24, B111/7, 12-14; QS Var. 14; DEL4169/1-19; BG/WAR 89; DDE142). The Local Government Act 1888 placed upon County Councils the care of lunatics, this function having previously been discharged by Quarter Sessions. The new asylum would therefore be the responsibility of Hertfordshire County Council.

On 20 April 1894, the Secretary of State approved the purchase of an area on the south-east edge of St Albans, central in the county in terms of population spread. Subsequently on 15 June 1894, Hertfordshire County Council purchased 174 acres, 3 roods and 4 perches of land from Captain Gaussen, including  96 acres, 3 roods and 31 perches of Hill End Farm and 77 acres, 3 roods and 13 perches of Beastneys Farm in the parishes of St Peter and St Stephen, St Albans. About 10 acres more were bought on 20 March 1895 from the trustees of Mr Kinder. Later, October 1899 saw the purchase of land from Mrs Hart, 5 acres and 28 perches bought from Mrs Croft in January 1900, and 1 acre and 9 perches gained by the diversion of an old lane. It was thought 2 acres, 1 rood  and 26 perches were lost to make a new road. The nett area was 184 acres, 3 roods and 12 perches – 8.5 acres of which would be occupied by the main building.

On 23 October 1893, Hertfordshire County Council appointed a Visiting Committee to provide an asylum. George Thomas Hine (1842-1916) was appointed architect on 18 June 1894. The hospital was based on his first primitive echelon pattern (as used at Claybury Asylum and Kestevan County Asylum). The plans were approved by the Council on 11 July 1895. It was built using bricks made on the site by Joseph Fenwick Owen, whose brickworks continued to operate there until 1940. The first phase of development was completed by January 1902, although building work was ongoing for a number of years. In October 1895, 2 acres of land had been sold to the Great Northern Railway. The railway line was built by 5 March 1899, opened 1 May 1899 and was eventually closed to passengers on 1 October 1951, with freight deliveries continuing until 5 October 1964.

The institution opened as the Hertfordshire County Asylum on 7 April 1899 and 100 males were admitted. Although primarily for pauper lunatics, from the beginning a few paying private patients were admitted. The first Medical Superintendent was appointed on 11 November 1898. Dr Norman Boycott, who retired in October 1925, stated that his aim was to achieve a cure, or at least to secure sufficient improvement for the patient to be returned to their relatives. He wanted to offer a calm supportive environment with non-stressful activities such as handicrafts, supervised country walks, entertainment in the recreational hall, the choir and band, and football and cricket teams. But progress was slow, which Dr Boycott attributed to many of the first patients having been confined, untreated, in workhouses or prisons. For example, in 1904 although there were 43 recoveries, 600 remained there. The success rate improved, but not enough to forestall the rise in numbers, and by 1939 the Hospital held 1260 patients.

The Mental Deficiency Act 1913 was the first since the Idiots Act 1886 to acknowledge the distinction between those with learning difficulties (and learning disabilities from birth or an early age), and those who had otherwise become mentally ill and might be treatable. The mentally deficient would remain amongst those at Hill End until Cell Barnes opened on the adjoining site in 1933. An innovative patient category was the outpatient, mentioned as early as 1925 and presaging the development of community mental health provision.

Patients at the ‘Hospital’ (now no longer the ‘Asylum’) were categorised as certified, voluntary or temporary. Voluntary patients submitted themselves of their own free will, while temporary patients were those incapable of volunteering themselves, but who were thought likely to benefit from a short stay. In 1934, the first outpatient ‘Nerve Clinics’ were started at Hill End and at St Albans City Hospital, and a Child Guidance Clinic was set up. In 1935 occupational centres opened, and also a new Pathology laboratory.

Cell Barnes Colony opened in 1933 on the adjoining site. In the 1920s, Hertfordshire County Council had bought 93 acres from the Earl of Verulam, to be developed as a ‘colony for mental defectives’. It was opened on 2 March 1933 and was to care for the mentally defective, being those with learning difficulties or disabilities from birth or a young age, whose recovery was not expected. Records of the hospital are held at Hertfordshire Archives and Local Studies and are catalogued under the reference HM2.

In the summer of 1939, when war seemed inevitable, plans were issued by the government to make provision for the care of air-raid casualties, and for the continuation of the treatment of the sick in the event of hostilities. These plans constituted the Emergency Medical Service (EMS). EMS hospitals were basically civilian hospitals, but they were also used for large numbers of service patients, particularly those requiring treatment in specialised units, and also when demands for hospital care suddenly increased. London was divided into five sectors, with one or more teaching hospital per sector. These central hospitals were to deal with emergencies due to either acute illness or to injury, including those resulting from enemy action.

At the edge of each sector a large hospital, usually a mental health hospital, was taken over by the government as a base hospital. Hill End was the base hospital for the St Bartholomew’s (Bart’s) sector, and new units for the surgical care of patients with head and chest diseases were established. Cell Barnes was also used for Bart’s patients, and both hospitals had the services of Bart’s nurses.

With war imminent, and fearful of the arrival of large numbers of war and air-raid casualties, the Government requisitioned Hill End in 1939 as an Emergency Medical Service Hospital. On 31 August 1939, 5 sisters and 18 nurses arrived at Hill End as the Bart’s advance guard. The majority of the mental patients were discharged or removed to other hospitals – 302 to Wallingford, 316 to Napsbury, 346 to Three Counties, 198 to Narborough, 38 patients discharged or released on trial – except for about 60 useful ones, and Hill End was taken over by St Bartholomew’s Hospital, London. Most of Bart’s staff moved to Hill End, joined by many of the former Hill End staff. As the Government’s fears were not quite realised, the hospital ended up treating mainly civilian cases. An exception was the flood of servicemen wounded after the Dunkirk evacuation of 1940 (see HM1/Pa2/6).

There were important medical advances made during this period, such as the early introduction of penicillin, and the plastic and reconstructive surgery carried out by the pioneering surgeon, Rainsford Mowlem. The work of this Plastic and Maxillo-Facial Unit was recorded by the artist Dickie Orpen (Diana Orpen), and her rediscovered drawings are now deposited with the Royal College of Surgeons. Treatment of mental patients continued at outpatients clinics in St Albans and elsewhere. After the war ended, the Bart’s units gradually began returning to London, freeing the Hill End wards for their original purpose. As the bomb damage to their London premises had to be repaired, it was not until 1961 that the last of the Bart’s staff finally left.

On 5 July 1948, Hertfordshire County Council surrendered the hospital to the new National Health Service. Hill End came under the Mid Hertfordshire Group (No 7) Hospital Management Committee, and the hospital would be administered by the Hill End Hospital House Committee. Dr Harold Palmer was appointed in 1951 to re-establish Hill End as a mental hospital. He aimed to treat patients more humanely, referring to them as men and women, rather than males and females. A mixed ward was set up where elderly men and women could sit, eat and watch television together. In 1959, the year the Thackeray Siamese twins were separated, wards were given names rather than numbers, and patients’ correspondence was no longer censored. Nursing staff were integrated rather than being organised into male and female hierarchies. The number of in-patients rose to 745 in 1965, but gradually fell after this due to increasing use of outpatient clinics. By 1982, the number of in-patients had fallen below 400, and by 1994, it was down to 132.

A year after the hospital’s farms were closed down, the Mental Health Act 1959 abolished the distinction between psychiatric and other hospitals, and encouraged community care. A groundswell of anti-institutionalism dominated the 1960s, from the anti-psychiatry of R D Laing to Government policy such as that voiced by Enoch Powell. In the midst of this, in 1964, a young poet named David Chapman (1944-1976) was admitted. Upon his release his account of his experience was published under the title, Withdrawal, and included photographs of the patients and hospital that he had taken with a smuggled-in camera. A film was planned by the publisher, George P Solomos, but never made. The buildings were, though, later used for at least two episodes of the television series, Inspector Morse.

Hill End Hospital: care in the community and closure

The NHS policy of care in the community, rather than in large institutions, came to be more fully implemented with the Community Care Act 1990, and a year later, the new Horizon Health Trust (1991-2001) began its winding down of Hill End, Cell Barnes and Harperbury hospitals.

In 1995, Hill End closed completely. The widespread closure of such outdated institutions was the culmination of decades of NHS and Government policy drift towards community care, fuelled by public outcry and anti-psychiatry, and enshrined in legislation such as the Mental Health Act 1959 and the Community Care Act 1990. This was encouraged by the proven success of outpatient facilities, a better acceptance and understanding of mental health, and increasingly effective self-medication.

Elderly patients were transferred to geriatric wards in St Albans City Hospital and elsewhere, whilst other patients needing permanent care moved to new small units that had up to 24 beds each. Just before Hill End’s closure, a ceremony was held on 29 November 1995. The contents of the buildings were then cleared by Hilditch Auctions of Malmesbury in November 1995, but the company has no surviving records concerning the sale. The site was then sold for housing. Highfield Park was formally opened on 13 November 1997. St Albans District Council currently (in 2009) owns the freehold, and it is run on a long lease by the independent and charitable Highfield Park Trust ‘for the benefit and enjoyment of existing and new communities in the area’.