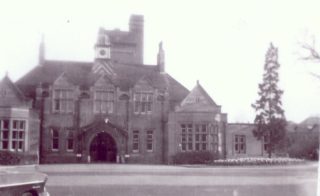 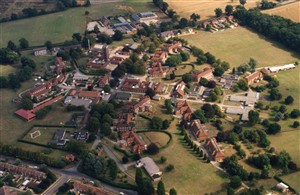 Elsie was born in South Church, Co. Durham and was one of eleven children. She left school at fourteen to work as a nursemaid for Mr & Mrs Hanselman, looking after their son, Ernest. When he was older, she went to St Nicholas Hospital, Gosforth, Newcastle-on-Tyne to work as a nurse.

From St Nicholas’ she came south, and for a while worked at Broadmoor special hospital. She found this quite scary, and told me of a gamekeeper’s wife who had made a pie of their baby, when her husband accused her of infidelity. Also, a lady who had drowned her two children in a boiling hot bath, and wandered the grounds saying “Why did I do it?”.

Elsie moved onto Hill End Hospital in St Albans, where she met Eric Page. I think he worked in the offices. They married in 1937 at St Mary’s, Paddington. Nurses weren’t allowed to be married at this time; nursing was considered a vocation, like teaching, so they kept their marriage secret. However, Elsie was seen drinking Bovril one day, instead of tea, at break time. She was sent for by Matron, who said that she believed that not only was Elsie married, but was also expecting a baby. Elsie confessed and was sacked. Valerie, their daughter, was born in 1941, and a son, Michael, in 1945.

Elsie returned to nursing at Cell Barnes when the children were old enough, mainly on night duty. It was at Cell Barnes that she struck up a friendship with Night Sister Winifred Wrigley, who at that time lived in the nurses’ home. Aunty Win later moved in with the family as a lodger, and it was years before I realised as a child that she wasn’t a blood relation!! Aunty Win became my godmother. She had never married, after her sweetheart lost his money in the Wall Street crash of the 1920s and couldn’t afford to send for her to join him.
Elsie became an SEN by experience of her working career, when registration of nurses came in. She finished her spell at Cell Barnes working nights at Tenterden House, near Bricket Wood. I used to love taking her to work and having a walk in the grounds.
One of the residents from Cell Barnes used to come on holidays with us when I was a child – Margaret Coppen. Another lady used to do drawings “for the children” – her name was Rosina Sczillat, if I remember rightly. I often went to Cell Barnes with Elsie to visit her friends on the wards, or to get her payslip. As children we used to go to the social club for the Christmas parties, and on trips to the ice shows at Wembley. Elsie continued to work part-time as a dinner lady at St Columba’s College in St Albans, and retired from there, aged 77.
Growing up, I wouldn’t have thought that I would follow my grandmother or godmother into nursing, but in 1980 I did. I started my training in May 1981 and qualified as a registered nurse in 1984. I lived in the nurses’ home for a while – we used to work hard and play hard. I worked with some inspirational people, whom I remember for their dedication to their work – Sister Lily Strods, Linda Raffermati, Paul Hughes, Sister Ma, Brian Denver, Gaynor O’Connor, Molly Winters, and Barbara Chapman. I worked at Cell Barnes, Roundwood Hostel and the Jarman Day Centre until 2005. I now work with older people, through Herts County Council.