You are here: Home>Hospitals>Leavesden>Is Jack the Ripper buried in Leavesden Cemetery?

Is Jack the Ripper buried in Leavesden Cemetery?

[WARNING: This article contains links to non-affiliated websites that may contain sensitive material due to the subject matter]

One of the world’s most infamous serial killers, Jack the Ripper terrorised London during the 1880s brutally killing at least five women. Although the murders were extensively covered in the press, the killer was never identified. Various theories have been put forward throughout the years as to who the culprit was, with one of the leading suspects having a connection to Leavesden Asylum. 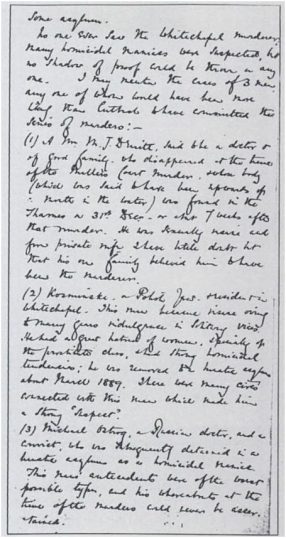 The document written by Sir Melville Macnaghten, Assistant Chief Constable of the London Metropolitan Police, in 1894 that names ‘Kosminski’ as one of three suspects in the Jack the Ripper case.

Aaron Kosminski, a Polish-born immigrant, was a barber who lived and worked near the sites of the murders in Whitechapel. Although little is known about his life, it is assumed that Kosminski is the person named as a suspect in documents by police investigating the Whitechapel murders. Referred to as ‘Kosminski’ without a first name, the documents were discovered years after the murders and indicated he was one of three main suspects. The Assistant Chief Constable for the London Metropolitan Police at the time, Sir Melville Macnaghten, described Kosminski as a person with a ‘hatred of women’ and ‘strong homicidal tendencies.’ The note goes on to say that he was admitted to a ‘lunatic asylum about
March 1889.’

In 1891, Kosminski was sent to Colney Hatch Asylum with records indicating that he had threatened his sister with a knife. The timing of his admittance coincides with the end of the vicious murders that were plaguing London’s streets. Records state that he suffered from delusions and auditory hallucinations, with a diagnosis of ‘mania’ being made.

Kosminski was admitted to Leavesden Asylum on 19 April 1894 under Section 25 of the Lunacy Act (1890). Reports reveal that he had not recovered and and needed ‘to be kept in a workhouse as a lunatic’. His health deteriorated whilst here and he passed away on 5 February 1919.

There is some confusion as to where he is buried with some assuming that after his death, he was buried in the north cemetery in Leavesden Country Park. However, the Watford Observer suggests that he was removed from the hospital and buried in East Ham Jewish Cemetery, London.

We may never know for certain who the murderer was, but the victims, Mary Ann “Polly” Nichols, Annie Chapman, Elizabeth Stride, Catherine Eddowes and Mary Jane Kelly, will always be remembered and there are plans to create a mural to commemorate their lives.