You are here: Home>People>An Update About "The Story Of A Little Hero"

An Update About "The Story Of A Little Hero"

Dad (aged 3), nan and Maureen, Bermuda. This was taken before they came over to Hertford so dad could have his procedures. 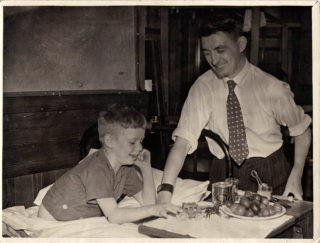 On Saturday 12th February 2011, I received what I assumed to be a random message via my Facebook account, from a lady named Helen Law. She was asking if I knew of a gentleman by the name of Bobby Harpum, as her grandad was trying to make contact with him.

I must admit, I can be rather sceptical of unsolicited messages through this medium – however, the mentioning of the name Bobby and my own surname of Harpum in unison is incredibly unusual, especially as the surname is very uncommon and virtually unheard of. Another factor that tantalized my attention was the name Bobby. You see my dad’s name is Robert, but to everybody who knows him, he is Bob!

Also, in Helen’s initial inquiry she had stated that Bobby would be in his late sixties now and lived in the Weymouth area a number of years ago – both facts were startling in their correctness.

After these initial points of comparison, I quickly realised that Bobby could be none other than my dad, so passed my details over to Helen, who then gave them to her grandad, a gentleman named Reg Law.

It transpired that Reg and my dad had spent a period of treatment at Hill End Hospital in 1950, when Reg was receiving treatment for an injury sustained during the Second World War, and my dad had to have surgery on his legs and other procedures (the story has been told by Reg in People/The Story of a Little Hero on these very pages). Sadly, my dad had passed away in 1994, so Reg and my dad were unable to be remembered to one another, but Reg telephoned me, and we had an enjoyable time speaking about my dad and his youthful exuberance whilst in Hill End, and his hailing as a hero.

It was moving to hear that so many years before I had looked upon my dad as being a hero for being the man he is to me, many others had hailed him as a hero for his doubtless reserves of positivity, and ability not to let things get him down.

Reg and my dad

When I came away from the telephone, I decided to go through the photo albums that I have inherited from my parents, to see if I could find any pictures of my dad from the days when he, my nan and my aunt had lived in Hertford, and I found a great many of them, some of which you can see here. The most startling discovery was the picture of Reg and my dad, during their stay at Hill End. I have vague childhood memories of my dad showing this picture to me and mentioning about Reg! I find this quite incredible.

I mentioned earlier that I look upon my dad as a hero, and I feel I can best qualify this by telling you about the man I can remember him being. He was always easy going and laid back, nothing ever used to faze him. Things could be going totally to pot and he never used to panic or get scared and, no matter what the provocation, he would never get angry or lash out. Despite being labelled as “disabled”, he would say that he was “differently enabled”.

One memory sticks out in particular. I was helping out at Dad’s workshop, where he ran his company from, and I was in charge of burning the rubbish in a large oil drum brazier. Next to where I was burning the rubbish (scrap wood, electrical cable, cardboard, etc.) was a rabbit warren, behind which were another couple of units that my parents owned and rented to other local firms. The rabbit warren was basically a large mound of earth, covered in bracken, ferns and some fairly well-established trees.

Being a child, I was easily bored, so wasn’t really paying too close attention to the fire; however, when I noticed that the ferns next to the brazier were starting to smoke rather severely, I decided I had better try and contain, what I thought was, the small fire that had started. So, instead of doing something sensible, like tell Dad, I went into the workshop, filled a mug from the tap and started to ferry cupful after cupful of water back and forth to the growing blaze! Curiosity got the better of my dad and he asked me what I was doing going in and out with cups of water? My response? “Oh, I’m just trying to douse the little fire that’s escaped the big one…!”

I’ll save everyone’s blushes by not repeating Dad’s exact words, but I’m certain you can imagine. He’s dashed outside and seen that the entire rabbit warren is ablaze. Quite calmly, he’s gone back into the workshop office and called the local fire brigade, many of whom he knew (no, this was not a regular occurrence!). Whilst awaiting their arrival, again quite calmly, he had got buckets from the workshop and started to fill these and carry them to the, now raging, inferno that was once the rabbit warren, and thrown the water over the flames. By the time the fire brigade had arrived, the fire was pretty much out, mainly due to Dad’s calm response. Fortunately, the fire didn’t spread to the units.

The key thing was though, that at no point did Dad seem to get angry or panic throughout the whole episode, and that’s why I look upon my dad as being a hero to me, as well as other memories and stories that I have.